The Osmio Genesis Hydrogen H2 Water Bottle is our best performing bottle to date, making over 2.0mg/l of supersatured h2 water. Being able to hold high pressure, the bottle is able to achieve over 3.0mg/l in two cycles of 5 minutes each (10 minutes in total), thanks to advances in design and technology that have been deployed successfully here. 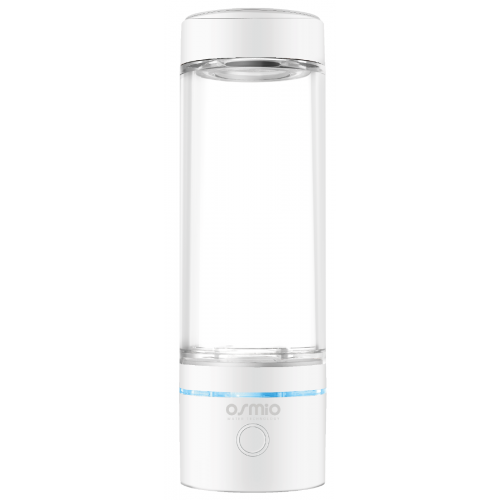 Your body is 62% Hydrogen by volume. Hydrogen is the atomic 'stem cell' of our universe. All matter and thus the world in which we live, and ultimately we ourselves, were created from hydrogen! At the lowest level in a human cell, hydrogen enables the healthy biological process, and deuterium is the waste product that destroys the biological process. Think of it a bit like a human cell being a car. The fuel is hydrogen and the exhaust product is deuterium.

Molecular hydrogen (H2) or diatomic hydrogen is a tasteless, odourless, flammable gas. H2 studies have focused on its role in the reduction of oxidative stress and redox homeostasis partly mediated via the Nrf2 pathway, which regulates levels of glutathione, superoxide dismutase, catalase, etc. H2, like other gaseous-signaling molecules (e.g. NO*, CO, H2 S), modulates signal transduction, protein phosphorylation, and gene expression, which provides its anti-inflammatory, anti-allergy, and anti-apoptotic protective effects.

Is Hydrogen an antioxidant?
Not in the strict definition of an antioxidant, but instead plays a significant role in signaling. Hydrogen is the first element in the periodic table which is also extremely reactive, bonding with another hydrogen molecule as soon as one is available to form hydrogen gas (H2). Being the small element means that it can get everywhere in your body when ingested including through the cell membrane, the blood-brain barrier, mitochondria cells and even into a cell’s nucleus.

How does hydrogen differ from other antioxidants?
Hydrogen has a natural property that enables it to dissolve into and move across cell membranes, so it can get into any compartment of our body. Hydrogen is different to other antioxidants which cannot do this. A good example is the central nervous system, which has a barrier called the blood-brain barrier to prevent molecules from getting into the brain, and hydrogen can do this which shows how effective it is as getting through the cell nucleus.

Some antioxidants are so strong that they can suppress all oxidants within the cell and research show that is not good for cell signaling and gene regulation, so those processes should not be affected. Hydrogen does not affect these processes and instead targets the oxidation of the cell.

Reviews
Write Your Own Review
Files

Related Products
Check items to add to the cart or