The woman who started drinking 3 litres of water per day - see the results after 4 weeks! 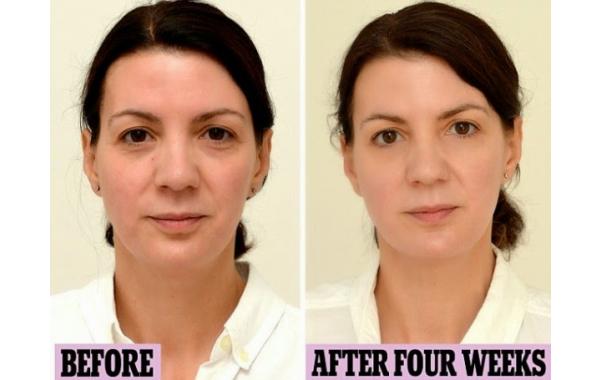 The woman who started drinking 3 litres of water per day - see the results after 4 weeks!

Sarah Smith, a 42 year old British and a mother of two, was suffering from migraines, and her doctor suggested drinking 3 litres of water per day. At the time, she felt sluggish and she was suffering from migraines. Her doctor suggested lowering her caffeine intake and seriously increasing her water intake which seems to have drastically changed her appearance (or is it just make-up?).

In the photo on the left, her daily routine was relatively normal. "I start my day with a cup of tea, then I might have a glass of water with my lunch and one with dinner - that's about a liter of liquid in 24 hours. It feels like plenty, but apparently it's not nearly enough," she revealed in an article for Daily Mail. There are 4.22 cups in a liter, which sounds like a lot...but it isn't. If you're like me, you're probably familiar with the old adage that we should be drinking 8 cups of water per day. Well, "8 glasses of water a day" is 100% wrong - that's not enough water! It was only after Sarah Smith took her doctor's advice and started drinking THREE liters of water a day - the equivalent of 12.6 cups of water per day - that she saw the stunning results in the above photograph. As soon as she began supplementing her diet with extra fluids, the migraines began to go away. "The blotches on my face are diminishing, and the shadows around my eyes are less pronounced," Sarah wrote in her Daily Mail article. Believe it or not, Sarah dropped 2 pounds solely by drinking more water. She didn't go on a traditional diet or start exercising more. However, she did report feeling less hungry. "I'm eating less because drinking water with meals makes me feel fuller quicker. I used to snack, but I was reaching for food when I was actually thirsty. Studies show 37 per cent of people mistake thirst for hunger." "The dark shadows around my eyes have all but disappeared and the blotches have gone...I'm feeling leaner and fitter, too, which is amazing, since the only thing I've changed is the amount of water I drink." The lesson? Let's all start drinking more water. Sub water for soda, juice, pop, or coffee. Not only will you lose weight and look a decade younger – you'll also feel better. If you'd like to see dramatic results like Sarah, forgo other beverages, including caffeine and alcohol. Before you get all cynical about it, why not try it for yourself!? If you notice great results then spread the word about drinking more water! Let me know your thoughts!
8 years ago
Search The Blog
Recent Posts