Following the release of our first hydrogen product we bring to you H2 Blue. Now you can test your water for its hydrogen concentration to ensure your product is working correctly and to monitor its performance. 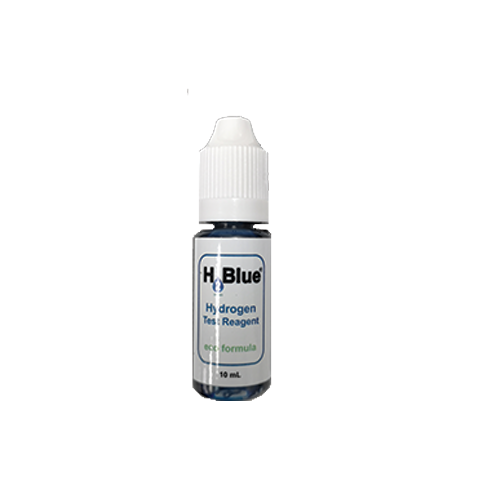 Use H2 Blue to detect dissolved H2 (molecular hydrogen) in your water. H2 Blue uses Methylene blue (a biological tissue dye used as an indicator in medicine). H2 Blue reacts with hydrogen rich water and turns clear when the h2 concentration is at least 0.1mg/l (ppm). Dissolved hydrogen levels can be calculated by preforming a titration where the H2 Blue reagent is added to a precise amount of water (6ml) which contains an unknows level of H2. The "blue" H2 Blue molecules react and turn "clear" in the presence of dissolved hydrogen gas (H2). As additional drops are added, the dissolved H2 molecules continue to be "consumed" until they are totally depleted. This is called the "titration endpoint". When the endpoint has been reached, additional drops will no longer turn clear, and the solution will remain blue. By counting the number of drops of H2Blue required to reach the titration endpoint , and then multiplying the number of drops by 0.1(or dividing by 10), the level of dissolved H2 gas in mg/L (ppm, parts per million) can be determined. For example, 8 drops x 0.1 = 0.8 mg/L of dissolved H2​

How does H2 Blue work?

Methylene blue is an oxidising agent which, in the present of a platinum catalyst, reacts with dissolved molecular hydrogen to produce the reduced (clear) form of methylene blue: leucomethylene blue. 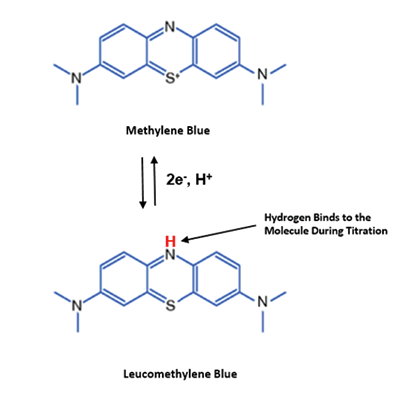 When using H2 Blue test a small quantity of water (6ml) and do not ingest the tested water. This product is not for consumption. It is also a strong dye so avoid contact with skin or anything that you do not wish to turn blue. The H2 Blue formula used is eco safe and we can provide a data sheet upon request. The quantity recommended is 6ml so that you can accurately calculate hydrogen concentration. Store in a cool dry place. If H2 blue freezes during shipping, allow to thaw for a minimum of 8 hours before use. Please do not try speed up the thawing process using a microwave or hot water.

To use H2 Blue first cover a surface with paper towels or something similar so that no surfaces are damaged/dyed. You have to work quickly with your hydrogen enriched water as the longer you wait the more H2 will escape. We also recommend using gloves, protective or old clothing and possibly eye protection. 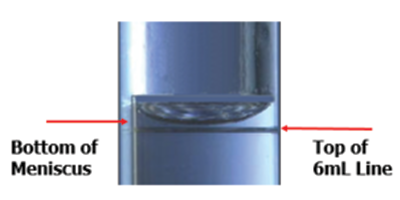 Then add a drop of H2 Blue to it. The drop should turn clear. Continue to add drops, stirring after every one, until the water no longer turns clear. Count the amount of drops it takes for the liquid to stop turning clear. As mentioned previously, by counting the number of drops of H2Blue required to reach the titration endpoint , and then multiplying the number of drops by 0.1(or dividing by 10), the level of dissolved H2 gas in mg/L (ppm, parts per million) can be determined. For example, 8 drops x 0.1 = 0.8 mg/L of dissolved H2​. 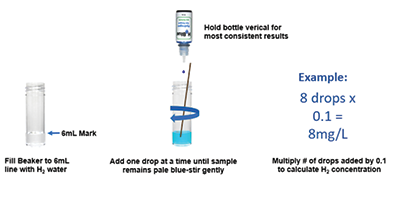 Some H2 tablet manufacturers & retailers recommend placing their tablets into an "open-glass" rather than a sealed container. These tablets produce H2 water characterized by a dense "milky fog" that does not dissipate quickly, often lingering in the container for many minutes (see picture). When using H2Blue to measure hydrogen-rich water produced by these types of magnesium tablets, a measurement taken from a sample (e.g. 500 mL) may require over 100 drops of the ethanol-based H2Blue before reaching the titration endpoint. This suggests a dissolved H2 level of 7.5 to 10mg/L (at 0.1mg/L per drop).

This may seem impossible without accompanying pressure. However, due to the apparent micro and nanobubbles formed, there exists an internal pressure in the individual gas bubbles that can reach very high levels according to the Laplace equation. The concentration of dissolved H2 gas is proportional to the gas pressure within the bubble according to Henry’s Law.

Small bubbles release gas into the solution, and large bubbles uptake gas from the solution and grow. This process is called "Ostwald ripening". Under these conditions, where the water becomes saturated with H2, much of the remaining gas is in a "quasi-dissolved" state. As drops of H2Blue are added to the sample, the dissolved H2 gas is consumed by the reaction, making it possible for more H2 to be released from the bubbles and dissolve into solution, where it will then react with more H2Blue (notice also that, under the right conditions, gas being produced by the Magnesium may dissolve directly into the water without becoming "quasi-dissolved" first). This cycle of consumption and dissolving will continue until all of the available dissolved & "quasi-dissolved" H2 gas in the sample has been consumed, and all of the magnesium has reacted (see diagram). 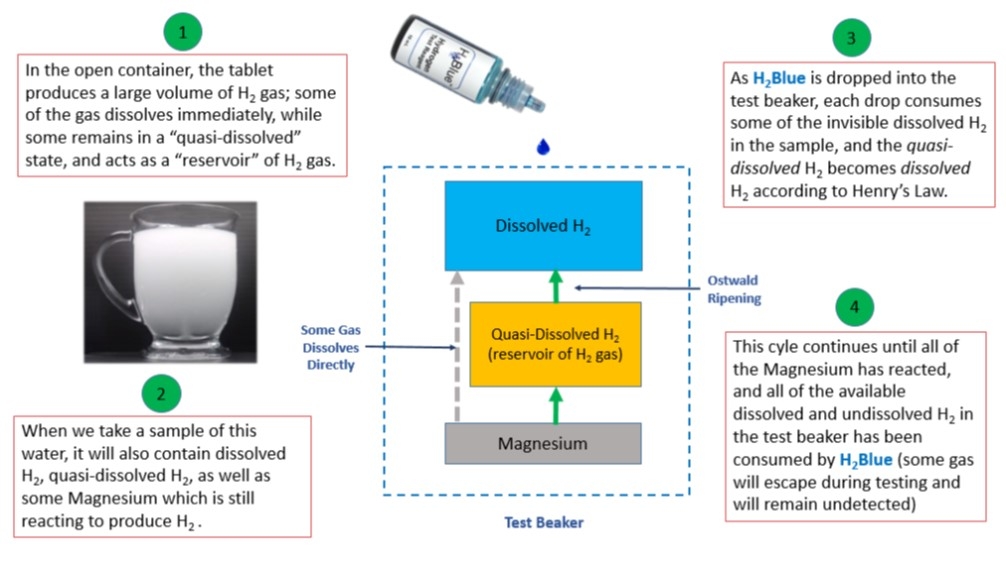 What can the total # of drops added tell us about the H2 water being measured? While counting the number of drops added does not tell us what the "peak" dissolved level of H2 is, we can still use the total number of drops added to calculate the approximate amount of H2 that will be ingested, which will include both the dissolved and the “quasi-dissolved” H2. Because we can also calculate these same values in any other H2 water, they can be used as an important tool for comparing ingested levels of H2 across many different H2 water technologies. There are some technologies that produce very cloudy/foggy water, but give very low readings with the H2Blue. This
simply means that the total amount of H2 in this water is very low, since there is a direct relationship between dissolved and undissolved H2 according to Henry’s law. That is, H2 gas is simultaneously dissolving into the water, and forming larger bubbles (coalescing) and escaping into the atmosphere. Indeed, if all the H2 gas produced from these types of tablets was dissolved in solution, then the readings with H2Blue would likely be even higher, since it would measure the gas before it escaped into the atmosphere.

Comparing the performance characteristics of the H2Blue eco formula and ethanol-based H2Blue: The ethanol and eco formulations of H2Blue perform identically for most types of hydrogen infused water. However, when comparing the performance of the new H2Blue eco formula to the ethanol formula for this specific type of H2 water, lower levels of the reagent can be added before reaching the end point (perhaps as much as 50% less than the ethanol). This may be due to differences in the specific gravity, hydrophobicity, surface tension, ionic strength, etc. between the carrier solvents of the two formulations. These differences may affect the zeta-potential, bubble stability, rate and propensity for bubble coalescence, etc. The ethanol formula does not appear to have a negative impact the equilibrium between the "quasi-dissolved" and dissolved H2. The eco formula, however, tends to destabilize these bubbles, which increases their growth and coalescence, resulting in most of the gas escaping into the atmosphere, thus resulting in a lower H2 level. While the eco formula can still be used as a reliable "indicator" of the relatively high levels of H2 gas in this particular type of water, if more accuracy is required, we recommend that you consider using the ethanol-based H2Blue.

Because ethanol-based products are classified as "dangerous goods" by USDOT (49CFR), international IATA (DGR), and other regulatory agencies worldwide (class III flammable) , they are not permitted to be shipped via the US domestic/international postal service (USPS). Other carriers (UPS/Fedex/DHL) which do permit them to be shipped require special certification training of personnel, as well as specific packaging, labeling, handling and documentation before accepting dangerous goods for shipping. Therefore, the H2Blue eco formula is the best choice under most circumstances.

How To Use H2Blue Hydrogen Test Reagent

See all
No questions yet. Be the first to ask the question!