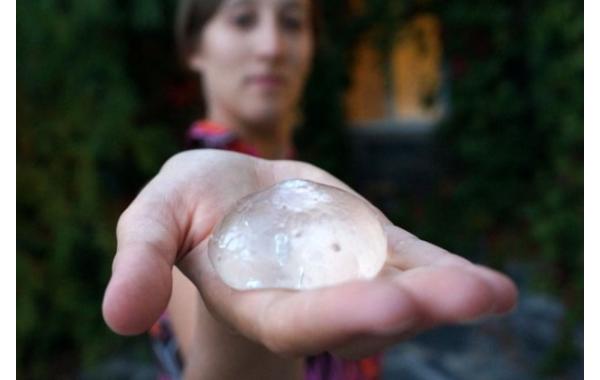 Imagine having a drink of water and then eating the container it came in! Sounds crazy right? But in fact this is the ingenious invention from London-based designers Rodrigo García González, Pierre Paslier, and Guillaume Couche.

The Ooho is made from an edible algae membrane and created using a technique used in cooking called “spherification” (those who watch Masterchef would have probably seen this done before). The water is held inside by a double gelatinous membrane. The gel around the water is created from brown algae and calcium chloride - sounds delicious right? Perhaps not!

But the idea in general seems to be growing in popularity as more and more companies are promoting the use of natural and edible packaging. It is also often the case that biodegradable and edible alternatives to oil based plastic packaging is cheaper to manufacture whilst being better for the environment. A good example is Wikipearl who, like the the Ooho, promotes the use of natural and edible packaging. Wikipearl developed a range of plastic-free food and beverage packaging technology for fresh fruit and vegetables. WikiFood skins are inspired by the way nature packages fruits and vegetables. The skins provide a protective coating against water loss and contaminant entry, and potential carriers of effective and functional nutrition. A good example is the WikiPearl ice cream portions which also help the ice cream stay colder longer than conventional ice cream.

The great thing about all these products is that they promote a simple and cheap, biodegradable and edible alternative to plastic. You may have heard a new term in the English language which has come about recently  "plasticarian" - this is a person who avoids contact with plastics in their daily life because they believe contact with plastics is very bad for the environment and they are linked to health problems. As reported by the Independent in June 2013: "The Royal College of Obstetricians and Gynaecologists (RCOG) issued startling advice last week, warning pregnant women to take a "precautionary approach" and avoid food in plastic containers or cans where possible. The report highlighted "endocrine-disrupters" found in certain plastics, including Bisphenol A plastics (BPAs) and phthalates, which can disrupt normal foetal development. BPA has also been linked to breast and prostate cancer, heart disease and sexual dysfunctions. The RCOG report noted that there was "considerable uncertainty about the risks of chemical exposure". Based on these findings, it may be wise to avoid plastics as much as possible  which makes products like the Ooho fantastic. When it comes to water filters, we always avoid any products made using BPA plastic and plastic-softening phthalates for these very important reason. The waters filters under NSF and WQA material extraction tests to ensure their quality and safety. The Ooho has achieved the Lexus Design Award 2014  and will be on exhibit at Milan Design Week on between 8th-14th April 2014. Maybe you will get to taste it if you go there!

Let us know what you think!
7 years ago
Search The Blog
Recent Posts